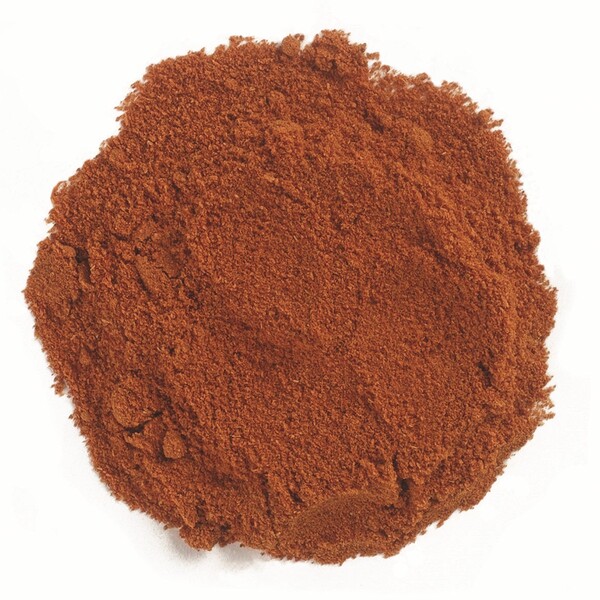 A sweet but sassy relative of the chili pepper, paprika is used to add warm, natural color and mildly spicy flavor to soups, stews, grains, and a variety of hors d'oeuvres.

Also known as sweet red pepper or pimento pepper, the paprika (Capsicum annuum) is larger and much milder than the chili pepper. An herbaceous annual that grows 20 to 60 inches in height, it's sometimes woody on the bottom, with leaves that are dark green on top and lighter underneath. The flowers are white and the fruit starts out green, then turns red, brown, or purple; the red fruit is harvested for paprika.

Domestic paprika has a fresh, green quality, while the Spanish variety is more pungent and the Hungarian is more lively. Spanish and Hungarian paprikas have become more alike, though, as the Hungarian peppers are now bred to taste more like the sweeter Spanish peppers. They still look different, though; Hungarian and domestic peppers are more pointed, while those from Spain are smaller and rounder. Hotter paprikas are now often obtained by adding cayenne to the powder to punch up the heat.

Paprika is graded according to classes: Spanish paprika has three grades (sweet, semi-sweet, and hot), while Hungarian has seven (or more) classes (special quality delicate, exquisite delicate, pungent exquisite delicate, rose, noble sweet, half-sweet, and hot). By the way, the brightest red peppers aren't the hottest. In fact, the lighter red and lighter brown are hotter than the bright varieties. For mildest flavor, choose the Spanish variety; for a bit more pizzazz, go Hungarian. While there's some debate about just how it happened, the first pepper plants (which were stronger than the paprikas we know today) are thought to have been brought to Hungary (famous for its paprika) in the 17th century. In the 19th century, during a contest to determine the best ground paprika, two Hungarian brothers introduced a milder version of paprika by removing the stalks and seeds from the peppers. These parts of the pepper are higher in the heat-producing capsaicin. A Nobel Prize (1937) has even been given to a scientist for his vitamin C research on paprika peppers. Paprika peppers have seven times more vitamin C than oranges, pound for pound.